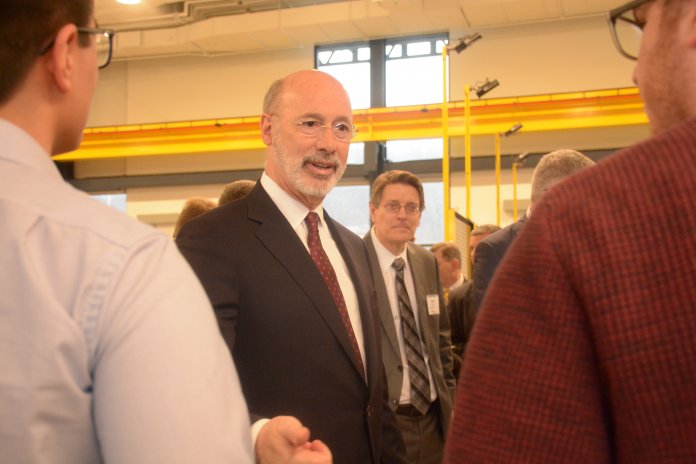 PITTSBURGH, Pa. — Surrounded by exposed steel beams and robotic arms, Gov. Tom Wolf announced a plan to invest $12.35 million in advanced manufacturing research at colleges and universities across the commonwealth.

Citing a long history of industry and innovation in Pennsylvania, Wolf said the grant program, including new accountability guidelines, was to restore the commonwealth’s lost status as a home for production.

“We lost the mojo we once had,” Wolf said.

The dollars, which must be spent in conjunction with universities, public or private, in Pennsylvania include:

“In the nation’s highly competitive high-tech economy, every dollar matters,” Ryan Glenn, Ben Franklin’s Director of Statewide Initiatives, said in a statement. “Investments in innovation will ensure our commonwealth remains a leader in supporting revolutionary technological developments, often driven by startups, that improve the human condition and address critical challenges now and in the future.”

The announcement came at what was once the last remaining steel industry site within the boundaries of the Steel City.

Employing 750, the LTV coke plant, which produced hardened coal for steel making, was closed in 1998. Since, politicians and business leaders alike have projected all their tech hopes for Pittsburgh onto the derelict industrial locale.

It officially reopened last September as a sleek post-industrial working space, a hulking steel frame of the old coke works a cage around a modern tech hub. $20 million in state dollars helped complete the project.

Even as Wolf spoke, workers in hard hats bustled about the plant, preparing more room for future tenants.

The tech proposal was not without some criticisms from conservatives.

But others, such as Rep. Jake Wheatley, D-Allegheny, saw opportunity, especially if the grants helped build a bigger and more diverse tech workforce that was inclusive of everyone, no matter what zip code they were born in.

“I’m looking very much forward to ten years, coming back here and saying ‘wow, how this room has grown, and how it looks much different,” Wheatley said. The site is in his Pittsburgh district.

The grants are the second proposal Wolf has revealed from his upcoming budget address on Feb. 4.

Last week, he unveiled a plan to invest in protecting “vulnerable citizens” by increasing funding for low income legal services and to reduce the state’s waiting list for community-based services for the intellectually disabled.